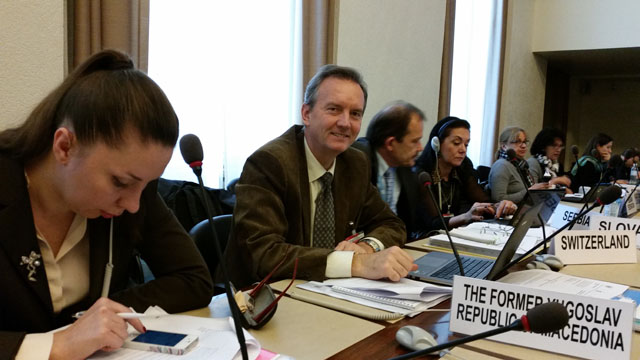 Prof.. Dr. Michael Kocubovski actively participated in the work of the meeting.

11/26/2014 The meeting began with a choice of chairman Mr. Kjetil Tveitan from Norway. Unanimously it was adopted the agenda of the meeting. The report on the progress in the process of ratification of the Protocol on Water and Health emphasized that 26 countries have signed the protocol and three countries (among them, the Republic of Macedonia) said they plan to do the same thing during 2015.

Establishing goals, implementation of measures and reporting within the protocol was discussed by presenting findings from national workshops in Kazakhstan and Turkmenistan, in order to promote reporting.

The progress in water supply, sanitation and hygiene, was presented by Mrs. Enke Overcoat from WHO, Bonn Office for Health Environment for Europe.

About the prevention and reduction of water-related diseases was shown a particular interest from the participants in the meeting. It was pointed to the need for training for better oversight of diseases originating from water. Macedonia has already implemented and improved supervision and training was conducted to strengthen oversight.

UNECE discussed about the assistance in supporting the implementation of national integrated water resources management and water supply and sanitation.

The Chairman of the Conciliation Committee elaborated on the procedure for reporting, in accordance with the Protocol on Water and Health and EU legislation.

Also, it was discussed about the implementation aspects of the work program for the period 2014-2016. The programme was unanimously adopted.