Current situation: According to the National Center for Control and Prevention of Diseases (KEELPNO) in Greece by mid-August 2016 were registered 65 cases of infection with malaria, compared to 85 cases reported during 2015. The largest number (61) of registered cases of malaria by public health authorities classified as imported , which means that the disease has obtained outside of Greece, and 4 cases were classified as indigenous or locally acquired, after input the disease in the country. Last 2 registered, locally acquired cases in the region of Thessaloniki, and the previous 2 of 2016, were reported in the region of Western Greece. 61 imported cases of malaria, 11 cases involved travelers returning from countries where there is malaria (endemic countries), and 50 cases of the disease among migrants who arrived in Greece migrant wave, mainly people from the Indian subcontinent or from one of the African countries affected by malaria.

Blood Donation: When in certain regions is confirmed local transmission of malaria, it is recommended that public health authorities to ban / suspend some time blood donation in the region, in the current and in the next season of activity of mosquitoes.

The affected areas in Greece are from the Peloponnese to Thessaloniki: Farkadona, Trikala, Palama, Tempe, Ahaj and Thebes (Central Greece); Evrotas and Andravida-Kyllini (Peloponnese); Halkida (Euboea); Marathon (Attica); and Lagada and Pylaia (Thessaloniki).

Assessment: At this point, the risk of malaria for travelers in Greece is low.

Assessment: In any country in Europe and in Macedonia also, there is a possibility and registration of imported cases of malaria in travelers returning from endemic countries. The risk of local extension of the disease is very small.

It continues to be in force recommendation for the application of standard precautions to protect against bites from mosquitoes, as well as most other vector-borne diseases (informational and educational materials for personal protection against mosquito bites available on the website of IPH – www. iph.mk).

Passengers in countries / regions where malaria is endemic disease (according to a list in-WHO publication International travel and health (ITH)) need to take antimalaric chemoprophylaxis before, during and after the return of these areas. Chemoprophylaxis is taken in the relevant Centre for Public Health.

Malaria is a life-threatening infectious disease caused by a parasite called Plasmodium, which is transmitted to humans by the bite of infected female mosquitoes. There are several types of Plasmodium of which P. falciparum is one of the deadliest parasites and is most prevalent in Africa, where there are concentrated most of the cases and deaths. Infection with malaria parasites can be present with different symptoms, which can be mild, but also very serious, and the disease can end with death. The first symptoms of malaria are: fever, headache, chills, and flu-like illness, vomiting, usually appear between 10 and 15 days after the bite of an infected mosquito. Without prompt treatment, malaria caused by P. falciparum can progress to severe disease and death.

Malaria is a disease that can be prevented and treated.

WHO recommends a comprehensive strategy for the prevention, control and elimination of malaria.

Key interventions include: the use of insecticide-treated mosquito nets and spraying insecticides indoors, diagnostic testing and treatment of confirmed cases with effective antimalaric drugs.

In recent years, the application of these measures contributed to dramatically reducing the burden of malaria worldwide. However, transmission of malaria persists in many countries around the world, causing hundreds of thousands of deaths annually. 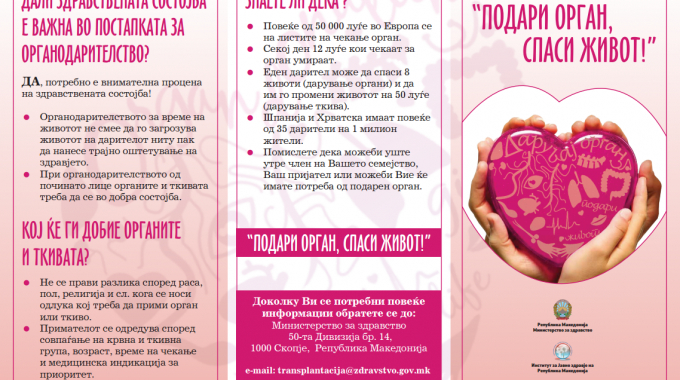