Each year cardiovascular disease is the cause of 17.9 million cases of premature death, and by 2030 it is expected that 23.6 million people will die of these diseases. This projected numbers from the World Health Organization (WHO), are expected the CVD to remain the leading cause of death worldwide.

Chart 1. Structure according to cause of death in N.Macedonia in 2018

Chart 3: Mortality from circulatory diseases in N.Macedonia by age, 2010-2018

Chart 5: Mortality from cerebrovascular diseases in N. Macedonia by age, 2010-2018

Chart 6: Mortality from circulatory diseases in N.Macedonia by sex, 2010-2018

The death rate from ischemic heart disease in the period 2010-2018 was higher in men (Chart 7), while the rate of mortality from cerebrovascular disease was higher among women (Chart 8).

Chart 8: Mortality from cerebrovascular diseases in N.Macedonia by sex, 2010-2018

In the period 2010-2018, acute myocardial infarction participated with about 95% of ischemic heart disease and cerebral infarction and stroke, unmarked as bleeding or infarction by about 89% in cerebrovascular diseases. 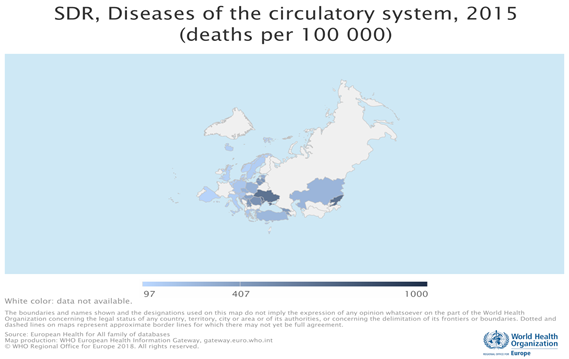 Having possibility that 80% of heart diseases can be prevented, the Republic of North Macedonia is implementing measures based on the evidence in order to prevent risk factors such as tobacco use, unhealthy diet, physical inactivity and harmful use of alcohol, timely recognition of CVD, improved treatment of secondary and tertiary level, strengthening staff, equipment, reconstruction of old and construction of new hospital facilities and other measures. The main objective is to address the growing burden of people with cardiovascular disease and reduce disability and mortality from these diseases.