Regarding the distribution of patients by age groups, the largest number of cases this week have been reported in the age group of 15-64 years (466 cases) and the highest incidence is registered in the age group, from 0-4 years. (I=45.6/100.000) 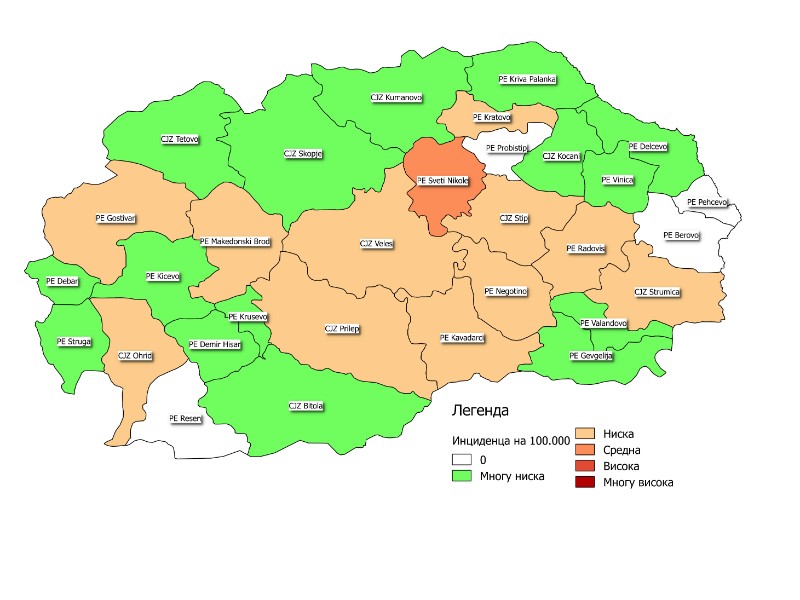 During this week the laboratory for virology of IPH has received 12 samples, materials for laboratory diagnostics. 6 samples(50%) are positive for the presence of influenza virus, subtyped as 66.7% Influenza B (75% Yamagata, 25% Victoria) and 33.3% Influenza A (of which 100% are A(H1N1)pdm09 (chart 2)

This week, 44% samples were confirmed as positive, with the common circulation of Influenza A and Influenza B virus although most of the laboratory confirmed viruses belong to Influenza B.  B / Yamagata type is dominated by the registered Influenza B viruses, but this type is not included in the trivalent vaccine for this season.

Related Posts
Fifth meeting of the Emergency Committee under the International Health Regulations (2005) regarding microcephaly, other neurological disorders and Zika virus
WHO statement 18 November 2016 The fifth meeting of the Emergency Committee (EC) on Zika…
SITUATION WITH INFLUENZA IN MACEDONIA, season 2017/2018 (week 19 up to 13.05.2018)
During the 19thweek of 2018, the Republic of Macedonia registered 35 influenza cases/flu-like diseases(I=1.7/100.000). Compared with the…
HOW TO PREVENT FOOD BORNE INFECTIONS IN SUMMER
In order to prevent the occurrence of alimentary toxinfections or alimentary intoxications, popularly known as…
Search
ИНФОРМАЦИИ ЗА COVID-19