Compared to the number of cases registered in the 45th week of last season , and compared to the typical seasonal curve (n = 64), the number of reported cases was 2 times lower. (n=78) (Chart 1).
The reported incidence is below the weekly limit of seasonal activity of the influenza virus (I = 36.38 / 100,000). Influenza activity is below the seasonal level, ie the threshold for entry into the influenza season has not yet been reached (chart 1). 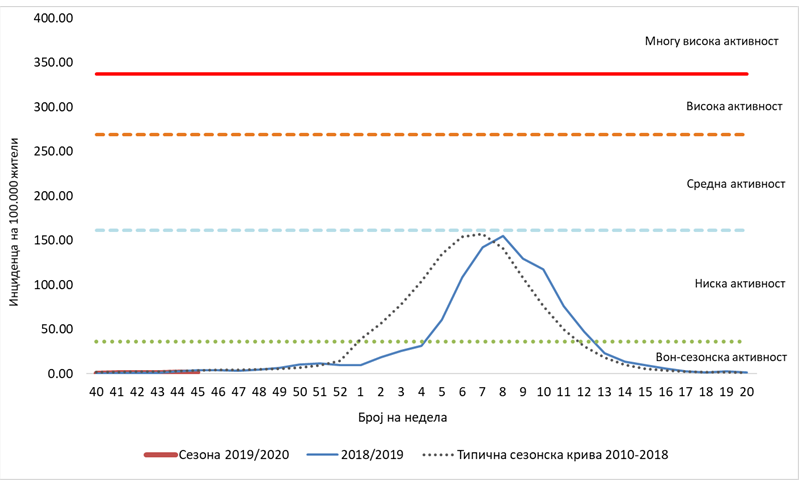 During the season 2019/2020, 31 materials were available for laboratory testing of influenza in the IPH laboratory for virology.All were negative for the presence of influenza.

Elderly people (over 65 years)•       Pregnant women• Persons older than 6 months with chronic diseases• Health workers• Persons placed in gerontological centers and those employed in these centers• Persons accommodated in social security institutions and persons employed in those institutions• Public service employees who are particularly exposed to infection• Children aged 6-59 months.

For the 2019/2020 season, the Ministry of Health procured a free four-valent vaccine in a total of 28,000 doses intended for priority population groups. From these, 1,000 doses are intended for children aged 6 months to 5 years, and the remaining 27,000 doses are intended for persons over 65 years of age, persons with chronic diseases and pregnant women at any time during pregnancy.Regarding the distribution of the diseases by age groups, cumulatively the highest number of cases was reported in the age group of 15-64 years – 64 cases (51.2%), and the highest cumulative incidence of 13.0 / 100,000 was registered in children from 5-14 years.Since the start of the 2019/2020 season, this lab has received a total of 31 human material from health facilities – from outpatient and hospital treated patients to regular and sentinel surveillance, all tested negative for the presence of the influenza virus.

Related Posts
The Impact of air pollution on human health
What is air pollution? The air is composed of a mixture of gases (78% nitrogen,…
INFORMATION on the situation of measles in the Republic of North Macedonia in 2018-2019, April 5, 2019
A summary of the epidemiological situation of measles in North Macedonia In the period 30.03-05.04.2019,…
October 17 – International Day for Eradication of Poverty
This year marks the 30th anniversary of the adoption of the Convention on the Rights…
Search
ИНФОРМАЦИИ ЗА COVID-19