Every year, on 31 May, WHO and partners mark World No Tobacco Day (WNTD), highlighting the health risks associated with tobacco use and advocating for effective policies to reduce tobacco consumption.

For World No Tobacco Day, 31 May 2016, WHO and the Secretariat of the WHO Framework Convention on Tobacco Control are calling countries to get ready for plain (standardized) packaging of tobacco products.

Plain packaging is an important demand reduction measure that reduces the attractiveness of tobacco products, restricts use of tobacco packaging as a form of tobacco advertising and promotion, limits misleading packaging and labelling, and increases the effectiveness of health warnings.

Plain packaging of tobacco products refers to measures that restrict or prohibit the use of logos, colours, brand images or promotional information on packaging other than brand names and product names displayed in a standard colour and font style.

Guidelines to Articles 11 and 13 of the WHO Framework Convention on Tobacco Control (WHO FCTC) recommend that Parties consider adoption of plain packaging.

Plain packaging builds upon other measures as part of a comprehensive multisectoral approach to tobacco control. Policy makers, civil society and the public can take action to ensure that their governments consider adoption of plain packaging.

Interest in plain packaging is progressing across the globe:

Leading cause of death, illness and impoverishment

The tobacco epidemic is one of the biggest public health threats the world has ever faced, killing around 6 million people a year. More than 5 million of those deaths are the result of direct tobacco use while more than 600 000 are the result of non-smokers being exposed to second-hand smoke.

Nearly 80% of the more than 1 billion smokers worldwide live in low- and middle-income countries, where the burden of tobacco-related illness and death is heaviest.

Tobacco users who die prematurely deprive their families of income, raise the cost of health care and hinder economic development.

In some countries, children from poor households are frequently employed in tobacco farming to provide family income. These children are especially vulnerable to “green tobacco sickness”, which is caused by the nicotine that is absorbed through the skin from the handling of wet tobacco leaves.

Good monitoring tracks the extent and character of the tobacco epidemic and indicates how best to tailor policies. Only 1 in 3 countries, representing one third of the world’s population, monitors tobacco use by repeating nationally representative youth and adult surveys at least once every 5 years.

Second-hand smoke is the smoke that fills restaurants, offices or other enclosed spaces when people burn tobacco products such as cigarettes, bidis and water-pipes. There are more than 4000 chemicals in tobacco smoke, of which at least 250 are known to be harmful and more than 50 are known to cause cancer.

There is no safe level of exposure to second-hand tobacco smoke.

Every person should be able to breathe tobacco-smoke-free air. Smoke-free laws protect the health of non-smokers, are popular, do not harm business and encourage smokers to quit.

Over 1.3 billion people, or 18% of the world’s population, are protected by comprehensive national smoke-free laws.

Studies show that few people understand the specific health risks of tobacco use. For example, a 2009 survey in China revealed that only 38% of smokers knew that smoking causes coronary heart disease and only 27% knew that it causes stroke.

Among smokers who are aware of the dangers of tobacco, most want to quit. Counselling and medication can more than double the chance that a smoker who tries to quit will succeed.

National comprehensive cessation services with full or partial cost-coverage are available to assist tobacco users to quit in only 24 countries, representing 15% of the world’s population.

There is no cessation assistance of any kind in one quarter of low-income countries.

Hard-hitting anti-tobacco advertisements and graphic pack warnings – especially those that include pictures – reduce the number of children who begin smoking and increase the number of smokers who quit.

Graphic warnings can persuade smokers to protect the health of non-smokers by smoking less inside the home and avoiding smoking near children. Studies carried out after the implementation of pictorial package warnings in Brazil, Canada, Singapore and Thailand consistently show that pictorial warnings significantly increase people’s awareness of the harms of tobacco use.

Only 42 countries, representing 19% of the world’s population, meet the best practice for pictorial warnings, which includes the warnings in the local language and cover an average of at least half of the front and back of cigarette packs. Most of these countries are low- or middle-income countries.

Over half of the world’s population live in the 39 countries that have aired at least 1 strong anti-tobacco mass media campaign within the last 2 years.

Even so, high tobacco taxes is a measure that is rarely implemented. Only 33 countries, with 10% of the world’s population, have introduced taxes on tobacco products so that more than 75% of the retail price is tax. Tobacco tax revenues are on average 269 times higher than spending on tobacco control, based on available data.

Illicit trade of tobacco products must be stopped

The illicit trade in tobacco products poses major health, economic and security concerns around the world. It is estimated that 1 in every 10 cigarettes and tobacco products consumed globally is illicit. The illicit market is supported by various players, ranging from petty peddlers to organized criminal networks involved in arms and human trafficking.

Eliminating illicit trade in tobacco will reduce the harmful consumption of tobacco by restricting availability of cheap, unregulated alternatives and increasing overall tobacco prices. Critically, this will reduce premature deaths from tobacco use and raise tax revenue for governments. Stopping illicit trade in tobacco products is a health priority, and is achievable. But to do so requires improvement of national and sub-national tax administration systems and international collaboration, such as ratification and implementation of the Protocol to Eliminate the Illicit Trade in Tobacco Products, an international treaty in its own right, negotiated by parties to the WHO Framework Convention on Tobacco Control (WHO FCTC).

WHO is committed to fighting the global tobacco epidemic. The WHO Framework Convention on Tobacco Control entered into force in February 2005. Since then, it has become one of the most widely embraced treaties in the history of the United Nations with 180 Parties covering 90% of the world’s population.

The WHO Framework Convention is WHO’s most important tobacco control tool and a milestone in the promotion of public health. It is an evidence-based treaty that reaffirms the right of people to the highest standard of health, provides legal dimensions for international health cooperation and sets high standards for compliance.

The 6 MPOWER measures are:

For more details on progress made for tobacco control at global, regional and country level, please refer to the series of WHO reports on the global tobacco epidemic.

The WHO FCTC Protocol to Eliminate the Illicit Trade in Tobacco Products requires a wide range of measures relating to the tobacco supply chain, including the licensing of imports, exports and manufacture of tobacco products; the establishment of tracking and tracing systems and the imposition of penal sanctions on those responsible for illicit trade. It would also criminalize illicit production and cross-border smuggling.

Posters: Get ready for plain packaging 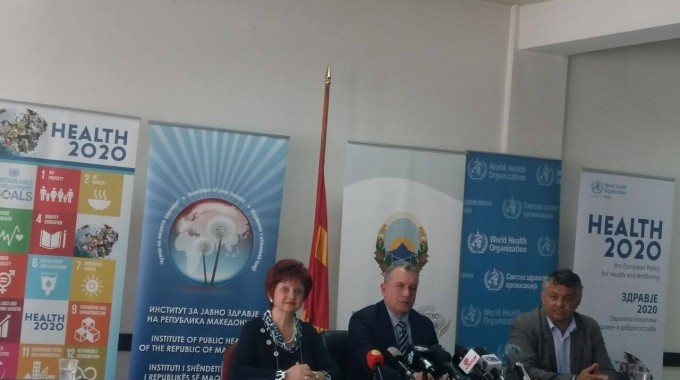 World Health Day – 7 April 2017
World Health Day, celebrated on 7 April every year to mark the anniversary of the…
Health and safety precautions for cold waves
Regarding the announced cold weather and snowfall we would like to inform you about precautions…
Search
ИНФОРМАЦИИ ЗА COVID-19