In order to reduce the incidence and mortality of women from cancer of the uterus in the Republic of Macedonia through preventive actions at the institutional level, the Government adopts every year program for early detection of cancer, prepared by the Ministry of Health, which is a special part of the Program for early detection and prevention of cervical cancer.  Through that in the past few years are implemented several activities to prevent cancer uterus. The activities for this purpose are implemented by the Ministry of Health, stem gynecologists, Institute for Public Health and the Centers for Public Health.

According doctrinal views, the target for organized screening of cancer of the uterus in the country are women aged 24-60 years. Recommended time interval for performing organized screening is three years. The first year or in 2012, in the Republic of Macedonia were included women from 24-35 years, in 2013 women of 36-48 years and in 2014 women of 49-60 years and women from 36-48 years which didn’t do Pap test. 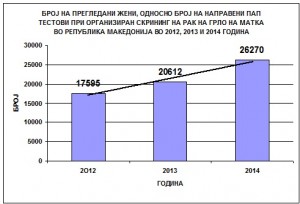 Source: Institute of Public Health of the Republic of Macedonia

Each year it has been revealed an average of 4-7% epithelial cell abnormalities of cytological analyzed smears.

The first place for localizing in women suffering from malignant neoplasms in 2010 takes breast cancer with incidence rate of 75.7 per 100 000 women. Second place in 2010 in the morbidity of malignant diseases in women is cancer of the cervix with 230 new cases and incidence rate of 22.4 infected women per 100 000 women. The incidence of malignant neoplasm of the uterus in the Republic of Macedonia in the period 2001-2010 year tends to decrease, and, the trend is declining (Chart 2).

In most of the cases (37.1%) deaths from cancer of the cervix is in the older age, over 60 years. But it is necessary to emphasize that the very high mortality rate of this disease is represented at women of 45-54 years (about 13 per 100,000 women). 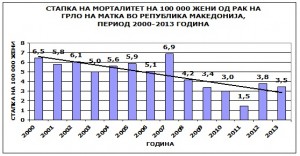 This speaks of the justification of a program aimed at early detection and prevention of cancer of the cervix in the latent and / or early symptomatic stage (phase). In this way,it is reduced the incidence and the mortality of women from cancer of the uterus in the Republic of Macedonia, which is the main objective of this program.