The influence of psychoactive substances on human health has been proven and documented long time ago. Prevention, treatment, rehabilitation and social reintegration are measures and programs that play a major role in tackling the problem of drug use and reducing the negative impact on society. In addition to the medical aspects of the problem that are resulting from the direct impact of psychoactive substances on health, other forms of harm are a risk factor, not only for people who use psychoactive substances, but also for the people that contact with. In this sense, we should only mention the consequences that result from overdose, trauma, suicide, mental disorders and diseases, disabilityand premature death.

The countries of South-Eastern Europe are a corridor for the transfer of drugs, especially heroin, to the countries of Western and Central Europe, so-called “Balkan Route”. The Republic of Macedonia lies precisely on the road of this route in the world, so some of the illegal drugs remain and are distributed in our country too. 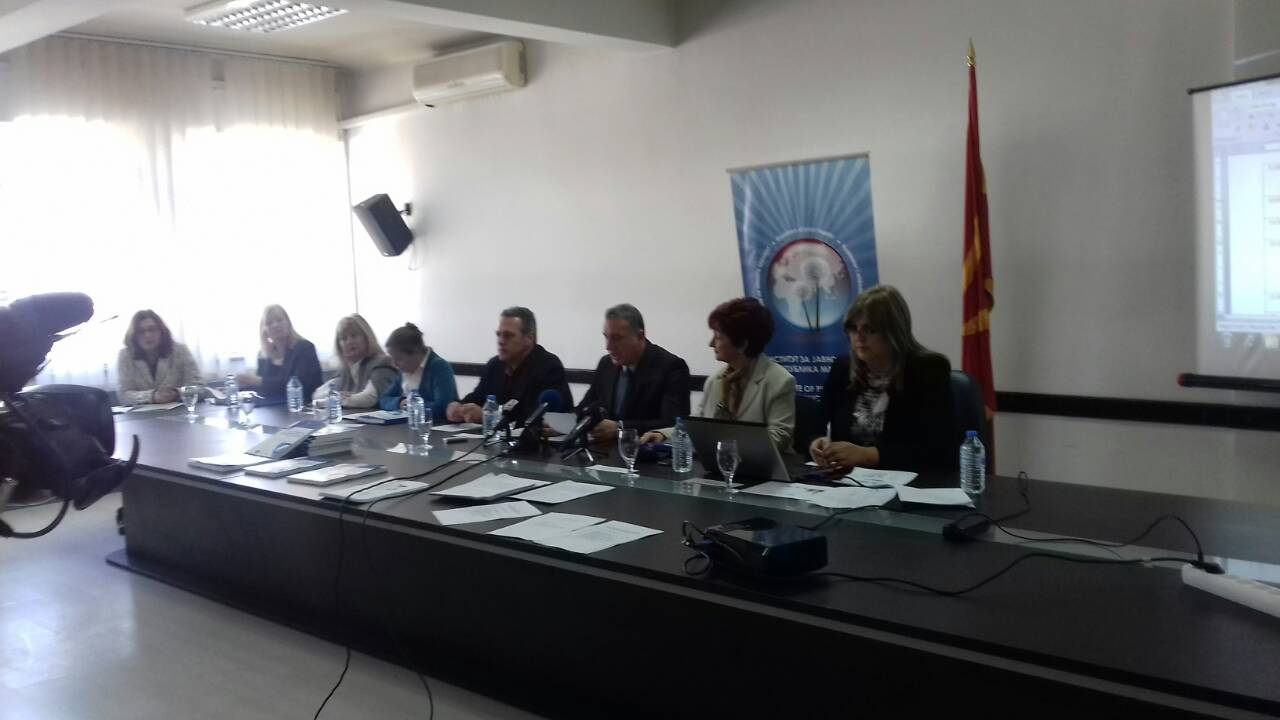 Several studies for the use of drugs, tobacco and alcohol among students, children aged 11-16, have been conducted in the Republic of Macedonia in the past period. The use of illegal drugs is about 2%, but we are worried about the fact that it has a trend to growth and that it is related to the age, so 5% of children aged 15 and 16 yearssaid that they had tried at least 1-2 times marijuana in their lifetime.

There was a lack of data for the prevalence of the use of psychoactive substances by adults at the national level until this year.

However, with the support from the Ministry of Health and in accordance with the guidelines and support of the European Monitoring Center for Drugs and Drug Addiction from Lisbon, the Institute of Public Health was the coordinator of the project Global Population Research on Drugs, which was implemented for the first time in the Republic of Macedonia at national level.

The press conference aims to present the results of the study through today’s promotion of the publication –“Research report for the use of psychoactive substances among the general population in the Republic of Macedonia”.

The significance of this cross-section study stems from the opportunity to compare our results with the results of other countries in Europe that conduct the study according to the same methodologyfor the first time.

The findings from the study represent a great contribution to the public health, because they are the basis for creating future policies in the fight against addictions of psychoactive substances and in order to protect the health of our population.

In the end, I would like to express my gratitude to the experts from Lisbon, the Ministry of Health, and to all the participants in the project team for the successfully completed work and to all present guests at this press conference, to thank you for accepting the invitation to attend this significant event.

DOWNLOAD PPT – USE OF PSYCHOACTIVE SUBSTANCES AMONG THE GENERAL POPULATION IN THE REPUBLIC OF MACEDONIA,2017

Related Posts
Malaria in Greece
Current situation: According to the National Center for Control and Prevention of Diseases (KEELPNO) in…
Worldwide COVID-19 status (12.03.2020)
On 11.03.2020 the WHO Secretary General declared a pandemic of COVID-19. According to the latest…
INFORMATION for a measles situation in the Republic of Macedonia up to October 13, 2017
No new cases of measles in the Republic of Macedonia have been registered during the…
Search
ИНФОРМАЦИИ ЗА COVID-19