On World Diabetes Day 2017, WHO joins partners around the world to highlight women’s right to a healthy future. Around 8% of women – or 205 million women – live with diabetes worldwide, over half in South-East Asia and the Western Pacific.

25-40 million people in Europe live with diabetes. In Central and Eastern Europe as well as in Western Europe, mortality from diabetes shows stable trends or decreasing trends, unlike in some countries where there is a trend of increase due to the high prevalence of over-nutrition.

The Major risk factors are:

During pregnancy high blood glucose substantially increases the risk to health for both mother and child as well as the risk of diabetes for the child in the future. Almost half of women who die in low-income countries due to high blood glucose die prematurely, before the age of 70 years. Diabetes is a major cause of blindness, kidney failure, heart attack, stroke and lower limb amputation.

In the Republic of Macedonia, in accordance with the data obtained from the Public Health Centers and the Institute of Public Health, in 2016 the incidence (number of newly registered cases) was 261.3% or 5410 cases of which 2473 were men and 2937 were women. Table 1. 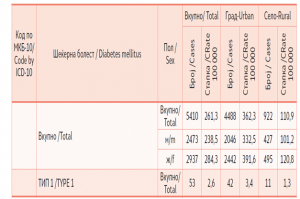 In a total of newly reported cases, 5357 cases are type 2 diabetes, with a rate of 258.8 per 100,000 inhabitants of which 2902 were women at a rate of 280.9% oo. It can be concluded that both in the Republic of Macedonia and in the world in certain countries, women are more likely to have diabetes than men, which means that future policies in the prevention of this disease should be in line with the WHO recommendations presented on the occasion of today’s World Diabetes Day.

The most common diagnosis reported by the responsible health institutions according to ICD-10 is insulin-independent diabetes without complications, with 2438 cases or 235.1%ooo of men, while 2882 or 279.6%ooo are women. 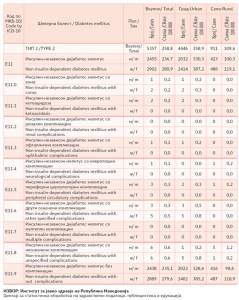 POLICIES IN THE REPUBLIC OF MACEDONIA

The strategic policies of the Republic of Macedonia for controlling diabetes are in line with recommendations of the World Health Organization, as well as the St. Vincent movement, which aims to unify the approach to tackling this disease and consist of the following: the main components are self-care , Community support and the existence of national comprehensive programs, greater awareness of the general public and health professionals to be achieved through the continuous training of general practitioners and nurses; to educate patients and their families how to use basic self-care techniques, treatment should be based on evidence, and skillfully and effectively address complications that are common in diabetic patients.

Established in 1991 by the International Diabetes Federation with support from WHO in response to growing concerns about the escalating health threat posed by diabetes, World Diabetes Day became an official UN day in 2006. The World Diabetes Day 2017 campaign promotes affordable and equitable access for all women with diabetes or at risk of diabetes to the essential medicines and technologies, self-management education and information they require to achieve optimal diabetes outcomes and strengthen their capacity to prevent type 2 diabetes.

Healthy eating, physical activity and the avoidance of tobacco use can prevent or delay type 2 diabetes. In addition, diabetes can be treated and its consequences are avoided or delayed by medication, regular screening and treatment of complications.

It is recommended strict adherence to 5 golden rules:

Related Posts
World Tuberculosis Day 2018
Each year, the World Tuberculosis Day is commemorated on March 24th in order to raise…
Crimean-Congo haemorrhagic fever
Key facts Crimean-Congo haemorrhagic fever (CCHF) is a widespread disease caused by a tick-borne virus…
INFORMATION on the situation of measles in the Republic of North Macedonia in 2018-2019, June 21, 2019
In the period from 14.06 – 21.06.2019, a total of 59 cases of measles were…
Search
ИНФОРМАЦИИ ЗА COVID-19