World Health Day, celebrated on 7 April every year to mark the anniversary of the founding of the World Health Organization, provides us with a unique opportunity to mobilize action around a specific health topic of concern to people all over the world. The theme of our 2017 World Health Day campaign is depression. Depression affects people of all ages, from all walks of life, in all countries. It causes mental anguish and impacts on people’s ability to carry out even the simplest everyday tasks, with sometimes devastating consequences for relationships with family and friends and the ability to earn a living. At worst, depression can lead to suicide, 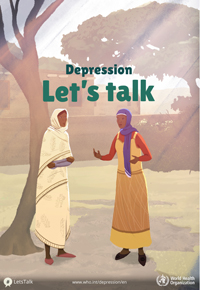 WHO estimates more than 300 million people are now living with depression, an increase of more than 18% between 2005 and 2015.

If you are reading this campaign guide, you are probably interested in getting involved in the campaign. Whether you work for the government, a nongovernmental organization or a media outlet, whether you are a doctor, teacher, journalist, blogger, parent or simply someone who has heard about the campaign and would like to get involved, this guide is for you.

∙ the general public is better informed about depression, its causes and possible consequences, including suicide, and what help is or can be available for prevention and treatment;

∙ family, friends and colleagues of people living with depression are able to provide support.

Depression is an illness characterized by persistent sadness and a loss of interest in activities that you normally enjoy, accompanied by an inability to carry out daily activities, for at least two weeks. In addition, people with depression normally have several of the following symptoms:

∙ a loss of energy;

∙ a change in appetite;

∙ feelings of worthlessness, guilt, or hopelessness; and

∙ thoughts of self-harm or suicide.

At the core of the campaign is the importance of talking about depression as a vital component of recovery.

The stigma surrounding mental illness, including depression, remains a barrier to people seeking help throughout the world.

Talking about depression, whether with a family member, friend or medical professional; in larger groups, for example in schools, the workplace and social settings; or in the public domain, in the news media, blogs or on social media, helps break down this stigma, ultimately leading to more people seeking help.

Who we are targeting

Depression can affect anyone. So this campaign is for everyone, whatever your age, sex, or social status. World Health Organization, has chosen to pay particular attention to three groups that are disproportionally affected: adolescents and young adults, women of childbearing age (particularly following childbirth), and older adults (over 60s).

∙ Depression is a common mental disorder that affects people of all ages, from all walks of life, in all countries.

∙ The risk of becoming depressed is increased by poverty, unemployment, life events such as the death of a loved one or a relationship break-up, physical illness and problems caused by alcohol and drug use.

∙ Depression causes mental anguish and can impact on people’s ability to carry out even the simplest everyday tasks, with sometimes devastating consequences for relationships with family and friends.

∙ Untreated depression can prevent people from working and participating in family and community life.

∙ At worst, depression can lead to suicide.

∙ Depression can be effectively prevented and treated. Treatment usually involves either a talking therapy or antidepressant medication or a combination of these.

∙ Overcoming the stigma often associated with depression will lead to more people getting help.

∙ Talking with people you trust can be a first step towards recovery from depression. 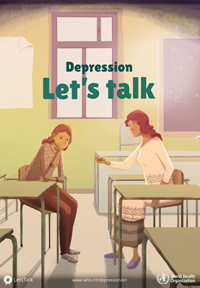 Related Posts
Workshop on Assessment of equal water access and sanitation and small water supply systems and sanitation in the Republic of Macedonia
Institute of Public Health of the Republic of Macedonia, in partnership with the NGO Journalists…
INFORMATION on the situation of measles in the Republic of North Macedonia in 2018-2019, July 19, 2019
In the period from 13.07-19.07.2019,, a total of 9 cases of measles were reported. From…
TrainMiC in Macedonia
On September 19, 2014 at the Institute of Public Health was held TrainMiC, first workshop…
Search
ИНФОРМАЦИИ ЗА COVID-19