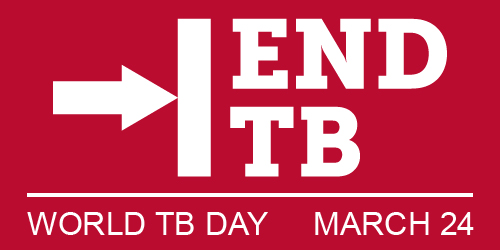 Each year, we recognize World TB Day on March 24. This annual event commemorates the date in 1882 when Dr. Robert Koch announced his discovery of Mycobacterium tuberculosis, the bacillus that causes tuberculosis (TB).

Although tuberculosis (TB) is preventable and curable, many people in the world still suffer from this disease.

World Day of TB is an opportunity for all people around the world to join the fight by educating others against TB and urging governments to take action.

2017 is the second year of a two-year “Unite to End TB” campaign for World TB Day. This year, WHO will place a special focus on uniting efforts to “Leave No One Behind”, including actions to address stigma, discrimination, marginalization and overcome barriers to access care.

This is essential in order to reach the target of ending TB by 2030 as part of the UN Sustainable Development Goals and the WHO End TB Strategy.

Last year, WHO reported that 10.4 million people fell ill with TB and there were 1.8 million TB deaths in 2015, making it the top infectious killer worldwide. This disease is deeply rooted in populations where human rights and dignity are limited. While anyone can contract TB, the disease thrives among people living in poverty, communities and groups that are marginalized, and other vulnerable populations.

These include: migrants, refugees, ethnic minorities, miners and others working and living in risk-prone settings, the elderly, marginalized women and children in many settings etc. Factors such as malnutrition, poor housing and sanitation, compounded by other risk factors such as tobacco and alcohol use and diabetes, affect vulnerability to TB and access to care. Furthermore, this access is often hindered by catastrophic costs associated with illness, seeking and staying in care, and lack of social protection, resulting in a vicious cycle of poverty and ill-health.

Objectives of the Global Strategy for TB prevention, care and control from 2015 to 2025

To achieve the objectives set out in the strategy for the ultimate end of tuberculosis, the annual decline in the global incidence of tuberculosis is needed to be increased by 2% per year in 2015, to 10% per year until 2025.

Situation in the Republic of Macedonia

In 2016 in the Republic of Macedonia is registered the incidence of active tuberculosis from 12.8 per 100 000 inhabitants or 267 newly infected cases, while in 2013 the incidence was 15.7 per 100 000 inhabitants or 323 newly infected with TB. In the analysed period from 2005-2014, the rate of incidence, as well as the prevalence rate shows a downward trend. Macedonia is among the countries with a low incidence in the European region. (Dijagram2)

Tuberculosis is a disease that can be treated and cured by full control of the doctor, by taking medication regularly and respecting the advices.

Active case finding of tuberculosis risk groups with selective radiophotographie. In 2015 are being planned radiographs at risk groups which include: patients in psychiatric hospitals, prisoners in the penitentiary in the country, internally displaced persons, drug addicts etc. In order for early detection of patients with tuberculosis and other non-specific lung diseases is used radiographic recording for persons who are at greater risk of suffering from tuberculosis.

DOT Activities – It means direct control of the treatment and monitoring of patients with tuberculosis, and health education through conversation with patients and their families.

Preventing the spread of TB is possible by treating new cases of tuberculosis according to standard modes of treatment recommended by the World Health Organization. The best preventive measure is proper and timely treatment of every case of tuberculosis which interrupts the chain of infection spreading.

Related Posts
INFORMATION for measles situation in the Republic of Macedonia up to November  3, 2017
No new cases of measles in the Republic of Macedonia have been registered during the…
How to protect yourself from flu during winter
Influenza is an acute respiratory disease caused by influenza A and B viruses, which usually…
Possible infectious diseases in flooded areas
There are three main groups of health risks to the population in the flooded region:…
Search
ИНФОРМАЦИИ ЗА COVID-19